A special Dawaat on the food from the Metiabruz; this is what the Metiabruz Dawaat by the ITC Sonar under the aegis of Kitchens of India by the famous ITC groups is all about.  I have attended the fest along with the fellow bloggers and foodaholics of Kolkata at the Eden pavilion in ITC Sonar. I just can’t resist  but to start with my journey of revising the era of the Nawab Wazid Ali Shah!  A Nawab who once wrote “Babul Mora Naihar Chooto Jaay; char Kahar Mil Mori Doliya Sajabe”*, which reciprocates the pain of leaving father’s place; a Nawab who was responsible for the newer, politer conversion of Lucknowi cuisine to its Kolkata counterpart where the famous Biriyani took a makeover and finally got the look of our very own Kolkata Biriyani… He was none other than last Nawab of Awadh who exiled to Kolkata by the British Government and spent his last years in the Metiabruz area of City of Joy! With the Nawab, the Bawarchi’s came with the royal Awadhi recipes of biryanis, rezalas, kebabs, and kulfis and so on.  The evening was fulfilling not only because of the food but also for the discussion over evolution and revolution of Metiabruz cuisine from the descendant of Nawab…

I consider myself a true blue bong and for me Mughlai cuisine starts with Biriyani and ends on Biriyani and I cannot think my biriyani without presence of Aloo! The story of incorporating Potato and Egg in Biriyani which is actually characteristics of the Kolkata Biriyani is quite famous. It is said that, when Nawab came to Kolkata, it was bit tough to feed the entire family and extended family with a proper Lucknowi fest everyday as they used to had in their ancestral place but fed everybody well Bawarchi’s started exploring the local ingredients in their cooking and incorporated our very own Aloo (Potato in the Biriyani) and the end result is today’s mind-boggling Kolkata Biriyani that we have here and there in the city of Joy. This story is quite famous but to discuss the era of Nawab , Awadhi cuisine, food from the royal family and obviously evolution of Kolkata  Biriyani or it is better to say the food from the Metiabruz ( where the Nawab used to stay) with his great grandchild Mr Shahenshah Mirza and his wife was altogether a different experience. Starting from the details of Awadhi Cuisine to the evolution of the food of Metiabruz; types of food items coming under this particular type to how they look at food now everything was part of the discussion that we, a group of bloggers having with them.

ITC Sonar  have chosen Chef Manzoor Alam for the Metiabruz Dawaat who came from a family of the Bawarchi’s and was born and raised in Metiabruz.

Coming to the food served as part of the Metiabruz Dawaat, we were first served with a Mango Sarbat which was really refreshing and perfect blend of raw mango and sweetness of sugar. 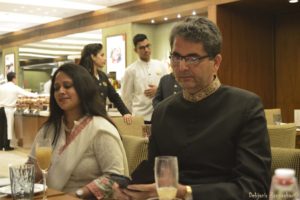 I did opted for vegetarian spread on that day given I was having a semi-fast.! Yes it was Nil-Shoshthi and controlled myself to not to have non-veg on that day!  Irony of life you see; to be part of a Mughlai fest but not to touch any non-veg. Chicken Reshmi Kebab and Paneer Tikka was served as starter and obviously I opted for the later and made myself happy by only clicking the chicken from a fellow blogger’s plate. Paneer Tikka was average with subtle flavors and as conveyed by my fellow bloggers so the Chicken Reshmi Kebab is.

As part of Main course we were served with Paneer Champ where Paneer chunks were served with gravy of Poppy seed and coconut which I found really good and quite matching with the flavors of the evening along with soft yet crunchy Parathas. Then came bowl full of properly cooked Dal fry with the typical Mughlai chonk. I found the Daal good and tasty.

The spread then reached the climax and we were served with the Taj of the Metiabruz  Dawaat; nothing but Biriyani! Ghosht Metiabruz Biriyani was served as part of the non-staple and I had opted for the vegetarian counterpart Aloo Chana Daal Biriyani. Obviously I was not much happy before tasting the Biriyani given comparing mutton with Chana dal is nothing but torture but to my surprise the Aloo Chana Daal Biriyani was damn good with the typical aroma of Kolkata Biriyani, presence of Aloo that was worth trying. The Biriyani was served with Subz Raita and Burhani. Me being a fan of Burhani, enjoyed my glass. Along with the Biriyani chicken Champ was served which I however not tasted but heard perfect in terms of cooking and use of spices.

The dinner ended with Phirni, Lachcha and Zarda, three famous Mughlai desserts. For me the best dessert served was Zarda given I found the Phirni less on the sweet and personally I don’t like Lachcha much. Moreover, I have tried Zarda Pulao after along time! 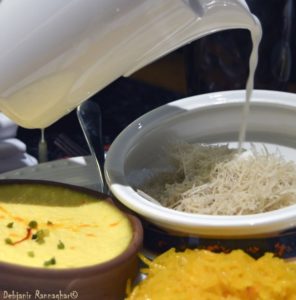 My take on the Metiabruz Dawaat:

A perfect spread; some authentic food from the gharana of Bawarchis of Metiabruz; Metiabruz Dawaat for me is one of its kind actually. With almost every dish good as part of the Dawaat my must have list include both Ghosht Metiabruz Biriyani and Aloo Chana Daal Biriyani; Paneer Champ; Chicken Champ and Zarda Pulao.

Why How and Where:

Disclaimer: I was invited as part of Kolkatafoodbloggers by the Management of ITC Sonar!