I never liked Doodh Sooji until recently. In fact, I did not cook it since long. Or it is better to say, I never cooked it before just because I don't like this Bengali dessert. Growing up in a Ghoti household in Central Kolkata, Dudh Suji was like a staple. Our dinner was never completed without some "Mishti". I guess making suji takes very little effort and hence, it was quite regular at home. In fact, they cook it till now and I got the idea of this blog post during my discussion with maa recently. Maa informed me as they cannot order Mishti frequently now, she is making suji for dinner almost every day! Baba has a fetish for fresh food (which includes dessert) and hence, Maa is making the easiest of the lot sans a few ingredients which they skip these days such as ghee. 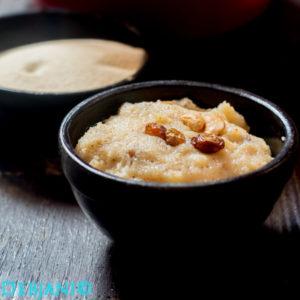 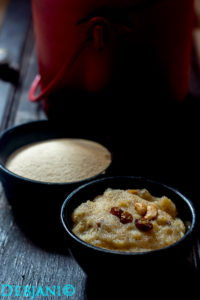 It reminded me of the growing-up years when we were part of a joint family. A big batch of Doodh Sooji was prepared for the entire family. Each would get one big spoonful of suji at the end of the dinner. Needless to say, for the regular meal, ghee was added in minuscule portion and so was a raisin. Back then, I never liked it! However, I felt like making it when Maa told me that they are having it. Till then I was not sure whether I would like it or not. Though I wasn't worried about the bowl full of dudh diye suji as both Pasta and Mehebub love this type of Bengali Dessert. 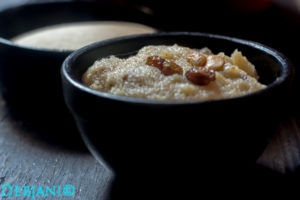 I would say no it is not. It is more of Payesh or Kheer than Halwa aka Halua. Basically, while making Doodh Sooji, we boil Semolina with a good amount of milk to make a semolina porridge. It is not as rich as Sooji Halwa, instead, it is comforting. Let me tell you, I loved it this time! Doodh Sooji aka Suji aka Mohanbhog is milk and semolina based Bengali versatile dessert. We at times serve it as porridge to the toddlers as well as to the aged-people. We skip ghee while making the lighter version. 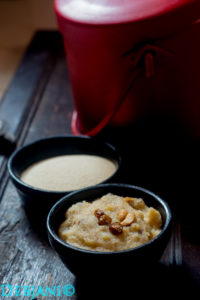 Here I must mention, Dida used to refer this dish as Mohanbhog. It, in fact, was quite regular at my mother's ancestral home, as part of Madanmohan'sd evening bhog. The entire family loved soggy luchi with Mohonbhog except me! This time, I fired a few luchi as well to go with the suji. delightful it was. 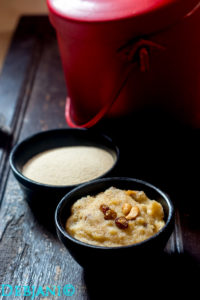 Making Suji every day or once in a while!

Doodh Suji, if cooked lightly can be given to toddlers and even aged-people. In that case, you must skip Ghee and whole cashew nut and raisin. As I cooked it as a dessert I have followed the general recipe. 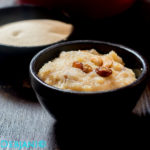 Doodh Sooji aka Suji aka Mohanbhog is milk and semolina based Bengali versatile dessert which can be eaten as porridge, and often served as prasad.

You can adjust Sugar based on your need;
Ghee can be completely skipped if making for the toddlers or for the aged-people. 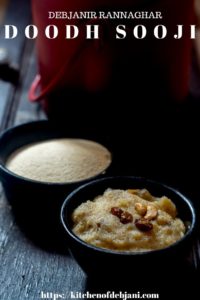