“Bangalan Matar wale Baingan ka Bharta sikh gayi” (read the bong girl finally able to make the Baingan ka Bharta with peas properly) 😛 this is what “N” my ex-colleague told me after tasting the Bharta that I prepared after almost 4-5 failed attempts.  Now you may ask what’s big in making “Baingan Bharta”; after all it is a much popular Eggplant mash prepared almost in every home in India, though, the form varies a bit (we Bongs prepare almost a similar thing known as "Begun Pora" at our places which is however only prepared on Tuesdays and Saturdays in my ancestral place. I for sure will share the recipe of Begun pora sometimes here along with "Shoni-Mongoler Golpo" but this time it is only and only Baingan Bharta).

There’s nothing big but a few years back I used to grab my colleague's moderately big fat Punjabi lunch box just for this special Matar wale Baingan ka Bharta prepared by his wife for the amazing taste that the Bharta contained. I never asked him for the recipe and I used to acclaim each time after having it that I will be able to prepare the same Baingan ka Bharta for sure with the same kind of taste and aroma! What was a time were those when we a group of colleagues used to share our food, our thought!

Finally after having it for more than hundred times and making it more than that one day I was told that my Baingan Bharta is having the typical aroma of a Punjabi household he belongs to and is having the typical touch that is found in his wife’s cooking and the best part is I received a text in the evening from his beloved wife “hey heard that now you are making proper Matar wale Baingan Bharta”! So this is the story of my simple homely Baingan ka Bharta which I still prepare at my place following the same recipe! 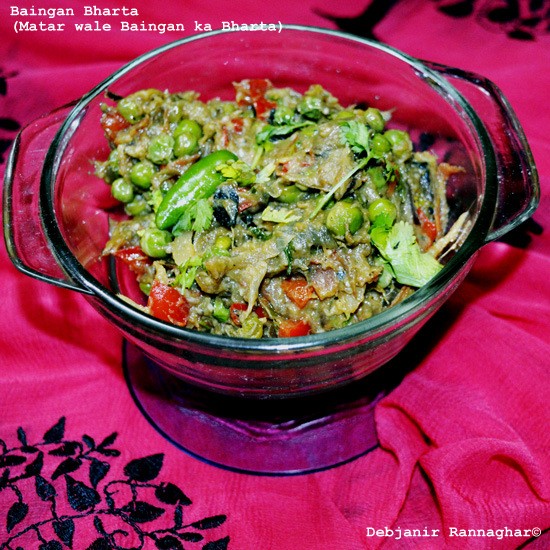 Coming to the Baingan Bharta from my kitchen or better to say the Punjabi Baingan Bharta from a Bong kitchen, it is a homely one and I don’t add any added flavor of charcoal smoke to it though if added that will turn it into the next level. I just opt for roasting the Eggplant on the direct open flame to give it a perfect smoky aroma which is actually the heart of this famous Punjabi dish. As I already mentioned I add fresh green peas to the Bharta since that is what I love from the best Baingan ka Bharta from my friend’s home. Apart from this, I love to add little Red bell pepper to the Bharta which gives an amazing aroma to the dish which is however completely optional.  Rest is very simple cooking with limited spices used. 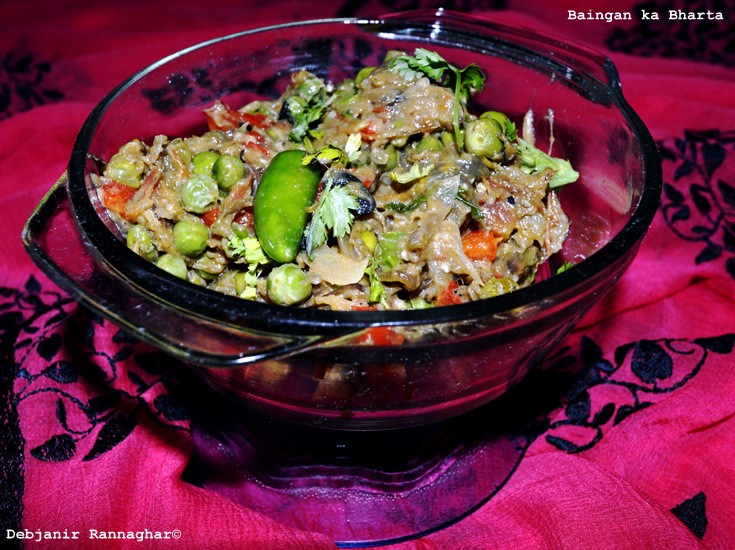 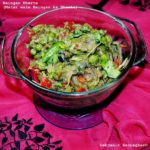 I prefer to roast Eggplant on the direct flame to give the Baingan Bharta a smoky flavor.
Eggplant can be roasted using an oven as well.