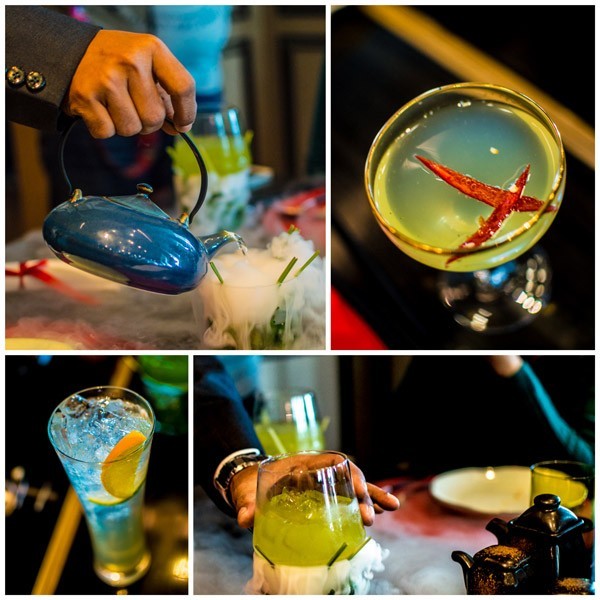 Upon visiting the JW Kitchen (You may refer to this for the JW Kitchen offerings especially the Buffet), two times, in fact, I was planning for the Asian Fine dine, Vintage Asia that JW Marriot has opened a month back on December, 16. Now that I (read we, the foodie family) have exhausted almost the entire budget that is fixed for F&B the month of January and hardly available with a few thousand for the half of the month I have decided to visit the place next month.  To be very frank for me,  being a  decent middle-class, opting for five stars more than once in 6 months of time is not something we are not used to until we have the present rates that are JW Marriott is coming up with. I was though a bit conscious with their individual restaurants as I was expecting not much moderate rate there until exploring the menu there at the Vintage Asia. 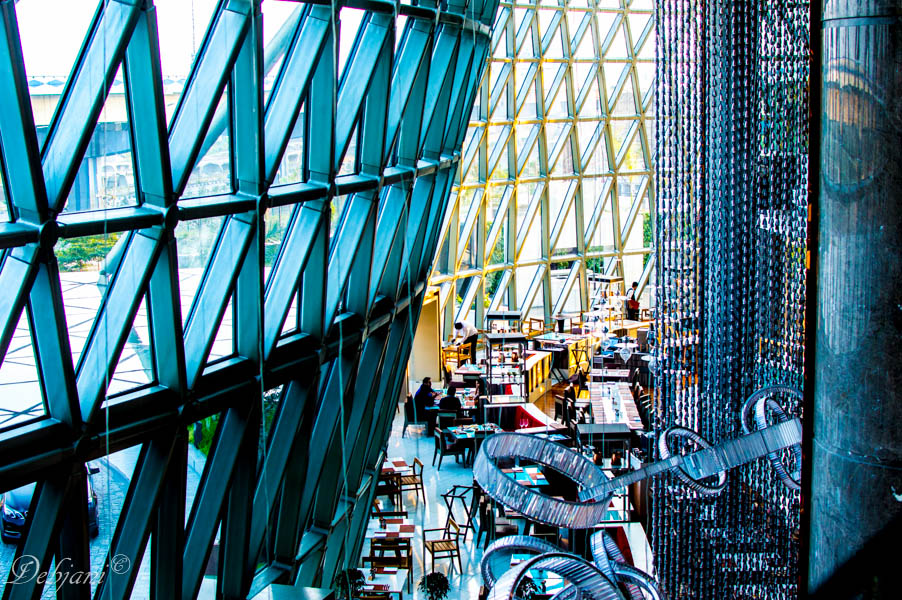 My recent joining to a food group called Kolkata Food Fanatics or KFF has given me the opportunity to visit the Vintage Asia before my planned date. It was a team of around 17 people, who went there at Vintage Asia and we were offered with a curated menu at a negotiated price. However, I quickly went through the menu to check the general pricing (what more can you expect from a finance analyst) and here came the surprise! I found the rates are actually quite in the budget range if we compare with other five-star speciality restaurants in Kolkata and even the boutique properties. Most of the items are actually ranging within 200-700 per plate and with a modest portion size.

Now food is obviously not about the price as at the end taste matters especially when the particular joint has passed the barrier of price and portion size. With a modern architecture and décor alike the JW Kitchen, Vintage Asia as well is full of modern flavour and décor and I personally found the interior quite not-much-over-the-top and hence settled there with natural ease. 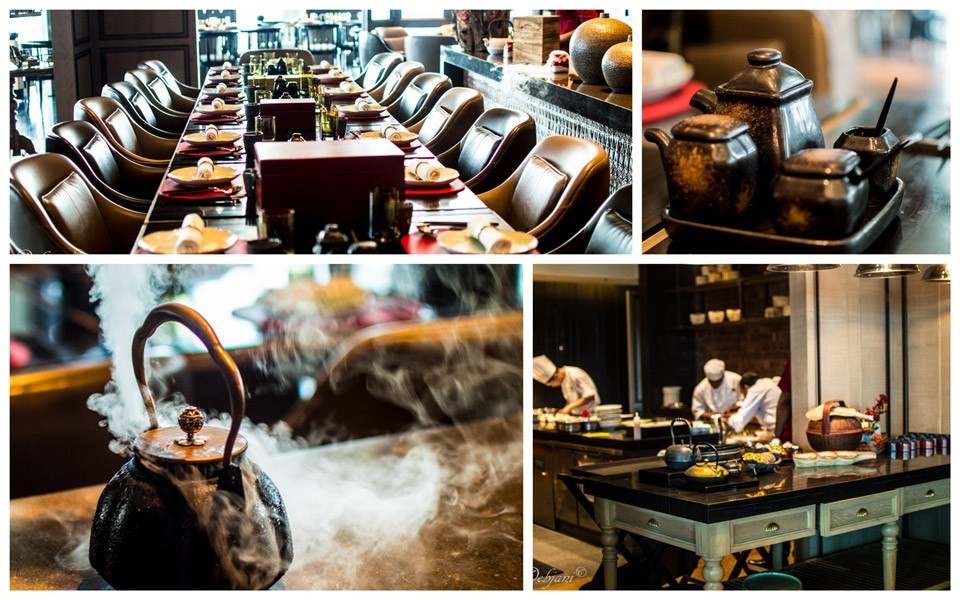 Our lunch started with a Chef’s special Bekti Bouche flavoured with Lemongrass and we all were served with refreshing Jasmine tea. As I already mentioned, ours was a specially curated menu from their entire offering, we were offered with actually an elaborate spread. There were two drinks were there, one Tequila base Cocktail, Sinsen which was flavoured with Asian spices that include lemongrass and celery and the sweetness was from Jaggery.  The Mocktail was Yum Siam which was a blend of Thai Red chillies basil, lemongrass and galangal. Now I am not a person of Tequila and I ended on having my decent portion of Coke Zero and little sharing from Dolon's Fresh lime, however, the table loved both the drinks from the menu. 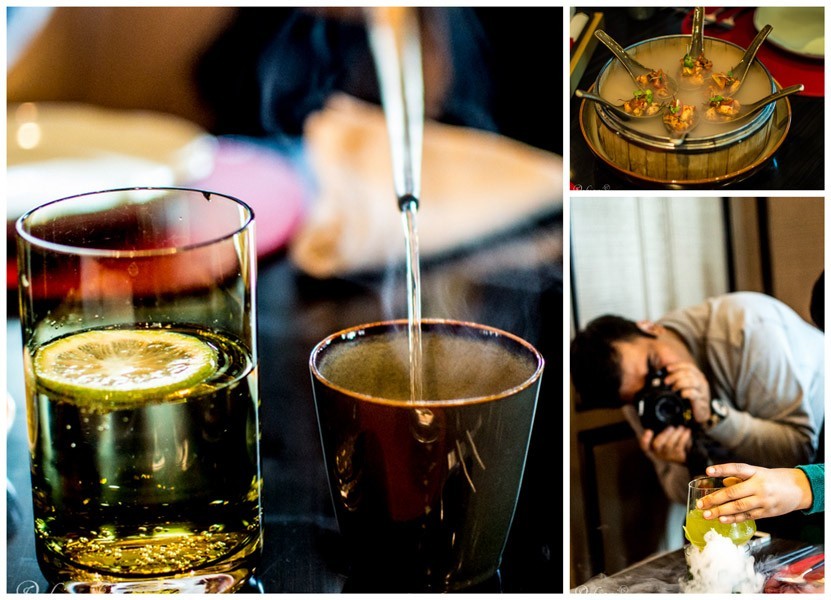 When I was kind of satisfied with the drinks, I was served with four varieties of dumplings and from this point I started feeling better especially after having the Pork Xiao Long Bao and I need to mention Prawn Har Gow, and even the vegetarian dumplings we had, Edamame and truffle and Asparagus & Water Chestnut Crystal Dumpling. For me, the pick of the day was the Pork Xiao Long Bao and the Asparagus & Water Chestnut Crystal Dumpling. The former one, Kind of created buzz and the entire table was mesmerised with the luscious dumplings while the later one was a treat for eyes (and taste bud too) with the crystal coated veggies. 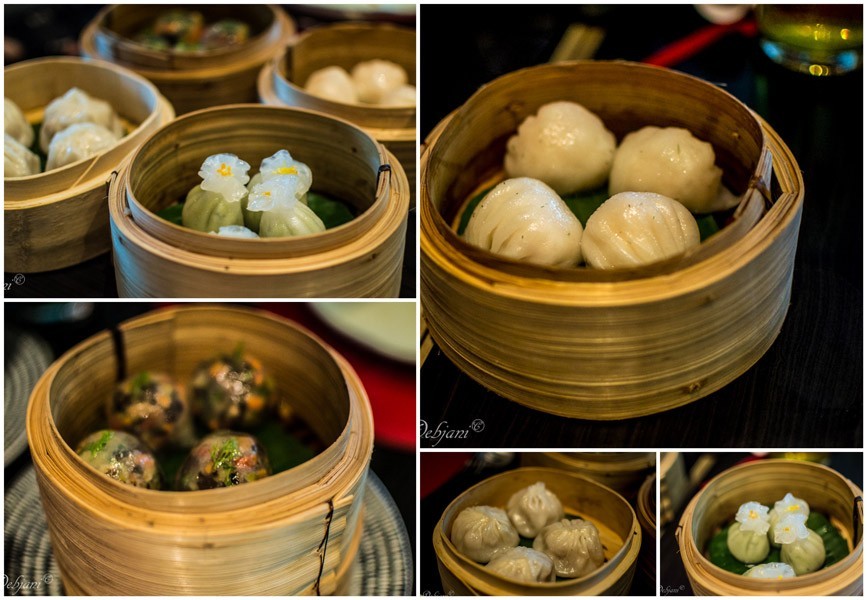 There were two options for Soup, a Hot and Sour and another one was Chicken broth with Chicken Wontons, Enoki Mushrooms, and Pak Choi. I don’t like my soup much on the hotter side and hence opted for the comforting Chicken Wonton Broth and ended on sampling a spoon from Indrajit Da’s Bowl who had ordered for the Hot and Sour. Rukshana Suggested mixing some Green Chili Sauce with the Broth to add required tanginess and I found the after result quite good. 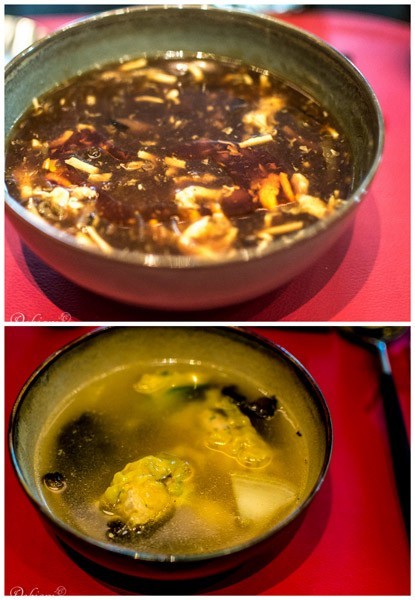 The Lunch then accelerated with two vegetarian and two non-vegetarians Appetisers, wherein Non-Veg, we were served with Chicken Wings with Chilli & Golden Garlic Paste and Crispy Fried Prawns, Salt & Sichuan Pepper with Wasabi Mayo. The Chicken Wings were perfect for our Indian Palate and naturally, most of us enjoyed the punch of sweetness and equally dominant hotness in the Wings just the way we like our wings and for me, the Prawn dish was worth having with the perfect balance of spices and crunch. Coming to the Vegetarian Appetisers, well to be very frank I was not expecting more as Tofu is not something I liked much but what I had was quite impressive with Silken boiled Tofu served with Edamame & Chiu Chow Chili Oil. The dish was a surprise to my palate. The Last item was Bean Sprouts Spring Roll which was average at least to my taste buds. 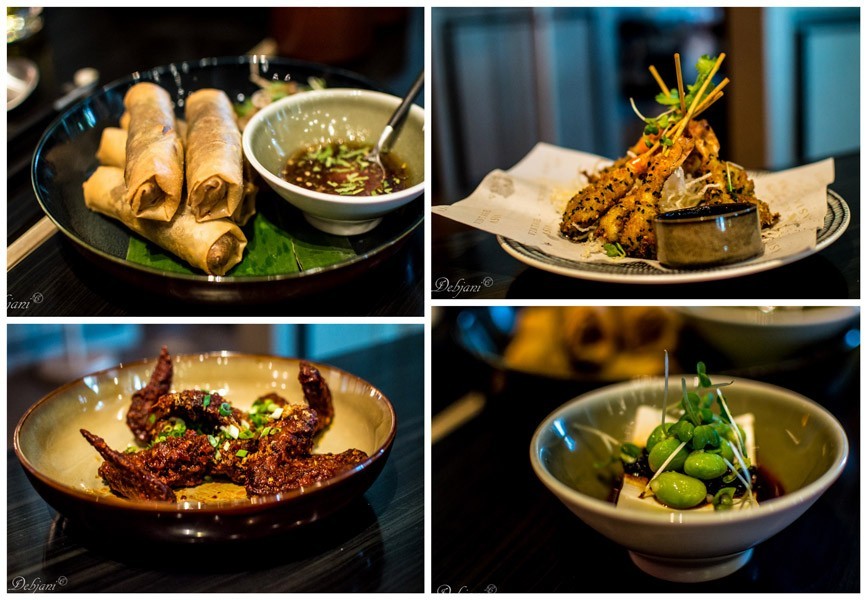 As the main course started, we were served with Hakka Chicken and Egg Noodles and Burnt Garlic Spring Onion Fried Rice along with two vegetarian dishes, Mapo Tofu with Celery, Young Corn, Sichuan Peppercorn and a Red Thai Curry. Well for me apart from the Red Curry rest of the three dishes were decent however the Red Curry is something I strongly recommend but with a spoonful of Steamed Rice. 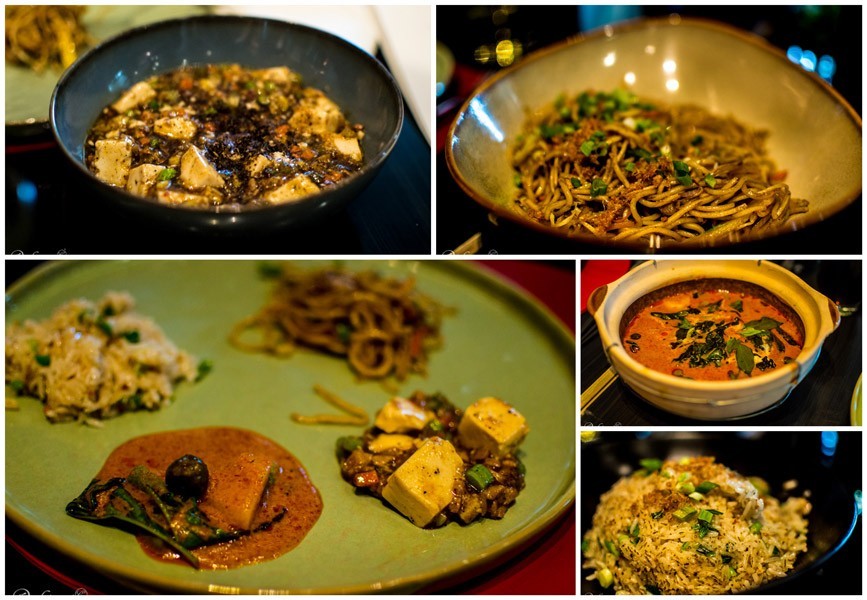 Until that point, we were, happy with whatever we were having and I decided to give all my goodie points to the Pork Xiao Long Bao and Chicken Wings but we never knew that the almighty had a completely different plan for us! Good god, we were served with something horribly good. We were served with something insane, the Spicy Caramelized Pork Belly with Pineapple Crispy Garlic. It undoubtedly was the hero of the menu and turned the good meal into a much better one.  At this point, we were almost full with the good food though ended on having little portions of the Sichuan Fried Chicken with Peppercorn and Mountain sun-dried chilly, Wok Tossed King Prawn in Xo Sauce, Crispy Potato with Spring Onions and Fermented Chilli Paste. However, I was kind of mesmerized with the Pork Belly and nothing after having that kicked me with the Flavours though the Sichuan Fried Chicken was actually good. 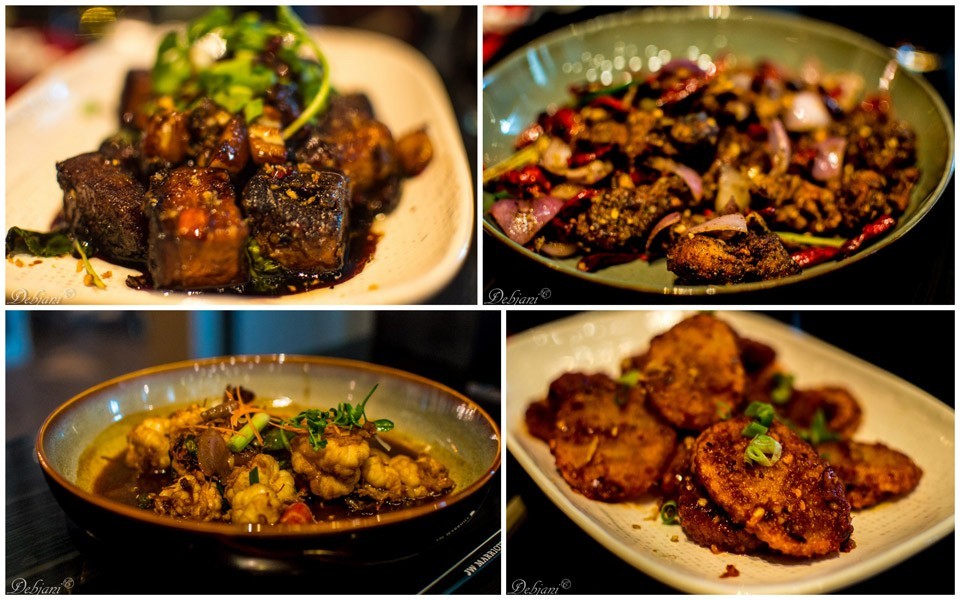 Crème brûlée is not something I can prefer to have as an Asian dessert and the Mango Coconut Crème brûlée with Palm Sugar Caramel & Sesame Tuile was average. I tried Toffee Sesame Banana with Salted Caramel Ice Cream from Rukshana and found it decent. 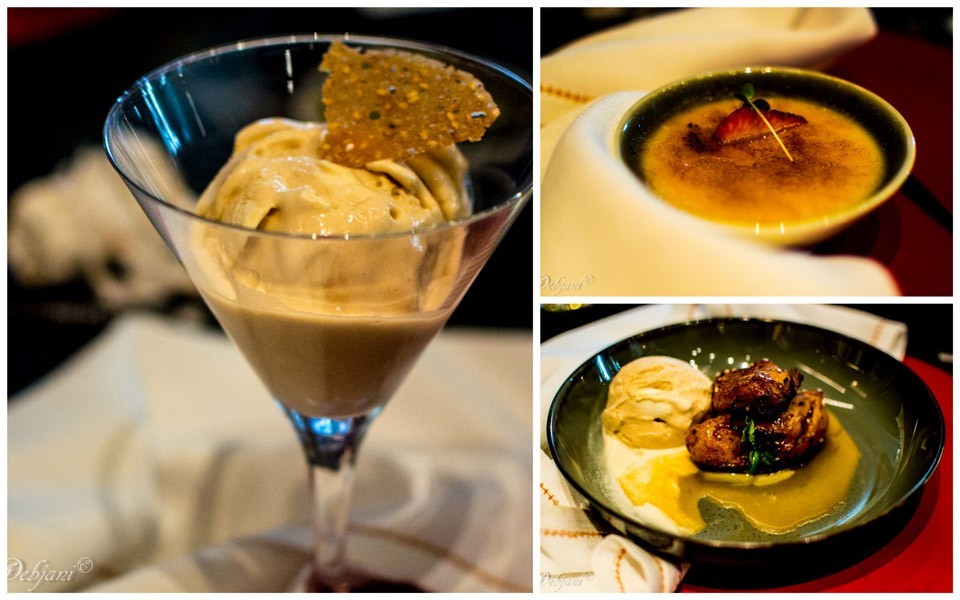 My best of 5 from the Vintage Asia, JW Marriot Kolkata:

All in all, it was an amazing experience having the reasonably priced Asian food in a five-star property. For two people, it may cost around 2250-2500 at the Vintage Asia which I really found on the decent side.  You may contact 033 66330000 to book a table there.

« Exploring the unexplored: My take on Dhansak after attending the Food Fest at Parsee Club
Aamchi Mumbai Local in Kolkata; the vegetarian food joint! »