We finally have welcomed JW Marriott in Kolkata a month back and what a welcome it is that ended on not getting the booking for the buffet even in the mid of the week. Yes, this is what happened to me when I and Mehebub decided to visit the place with Pasta end December and I ended on not getting the reserved table after two consecutive attempts and it was kind of a shock to me! I mean, I do have little idea about the food scenario of the city of joy but not getting a booking is something new to me. Naturally, discussions started with the friends (read social media posts) and I found it was not only me (fortunately!) however; I finally got my table booked with a little interference by my dear “P”. By that time, I heard it was nothing but a gimmick but my visit prove the same wrong at least for the weekday dinner. It was completely full and believe me, I was happy to see the crowd in a five star for that matter. Now the reason behind is actually simple, the negotiated price JW Marriott Kolkata is offering now which if compared with city based buffet rates is far below than the buffet cost by other five-stars and in fact quite at per with  the general fine dine rate. Naturally, after having a decent rate next thing came to my mind was the food spread and service and with that note let me share my experience of visiting JW Marriott Kolkata with the family followed by attending the bloggers’ table. 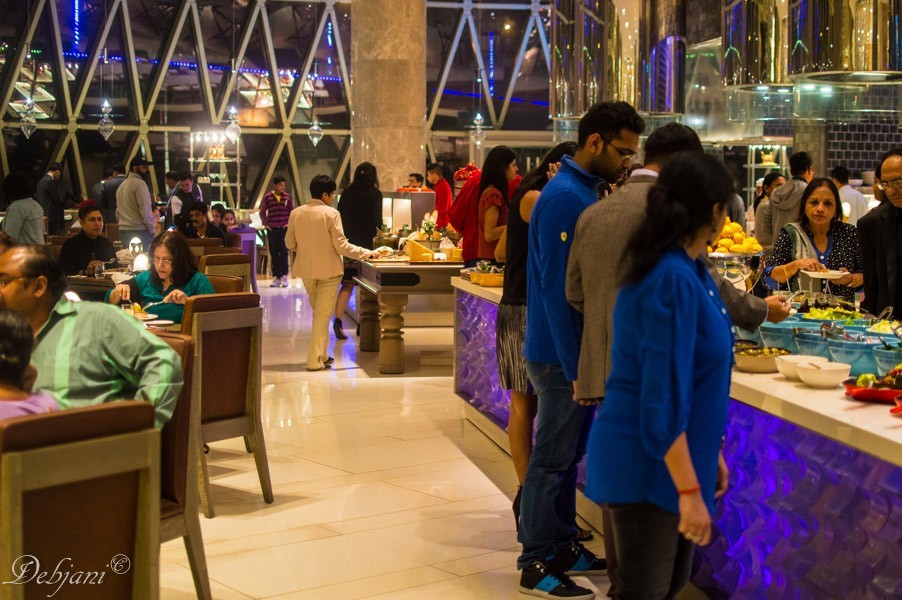 The Buffet at JW Marriott Kolkata:

Now first thing first, the food, and the spread is quite huge and well balanced in the buffet by JW Marriott Kolkata. My man was quite impressed with the interior and especially the modern décor and he even started discussing the geometric patterns and use of metal (well I had no choice but to listen to him :P; what can you expect from an Architect by the way) however I ended on exploring the kitchen with the little pumpkin though it was more thorough exploration on the day of bloggers meet. The grand JW Kitchen is divided into different counters that include Starters and Appetizers, Indian and Local food, Asian food, Western Food, and Dessert with the option of the live counters.

I Found the Appetizer counter and Asian and Western spread quite well while the Indian spread and Desserts were actually the cream on the top. One thing I found really good, the way they have balanced the menu. Options are vast and I, however, ended on choosing quite same on both the days that include a perfect platter of salad and cold cuts with dressed prawns followed by Kebabs. As the main course, I ended on having Biriyani both the day and it was quite decent.  No Indian meal of mine is complete without the Daal and hence I opted for the Makhani Daal followed by a serving of Malabar Fish curry and a chunk of mutton. There is a mini counter for Daal, Bati, Churma which indeed is worth having. There are several live counters for cocktail snacks and Italian and Chinese spread and we ended on sharing our portion both the days. Finally the best part of the Buffet, Dessert, though I am not a person with a sweet tooth but what a spread it was. The options are damn good and especially I loved the low sugar and no sugar desserts.  I ended on tasting the Tiramisu, Pistachio Fudge (this was amazing), Cream and fruits, a piece of Bengali Sandesh and a little portion of éclair. If you love your portion of Waffle, do try those at the buffet at JW Marriott Kolkata.

We were served with some dishes from the  A la Carte as well which was started with a refreshing Watermelon Mojito followed by a  Salad prepared with Burrata and different varieties of tomatoes,  Father Micheal’s Burrata. The next item served was Pulled BBQ Jackfruit Sliders which was a burger filled with our very own “GACHPANTHA” and well I found it good actually, however, what made me happy was the Black pepper crusted Salmon and lemon herb butter. The Burmese platter of Khow Suey was actually comforting yet filling and they do have a vegetarian version of the same as part of the A la Carte. The last item we sampled from the A la Carte was a dessert, Berry Classico and good god it was mindboggling and balanced yet tasty with 3 types of berries, a stuffed mousse cake and a serving of ice-cream.

Here’s the contact number of the JW Kitchen for booking the table (033)66330000 which I strongly suggest opting for to avoid the rush.

The A La Carte Menu is available round the clock and here are the details of the Buffet by JW Marriott Kolkata.

Disclaimer: this post is based on Debjani’s personal visit to JW Marriot Kolkata for buffet dinner and from the Bloggers meet for which she was invited by the management.