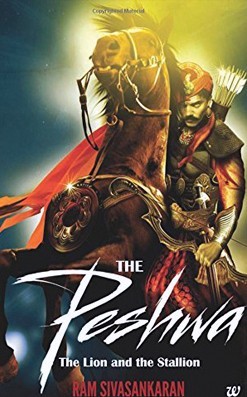 The Peshwa- The Lion and the Stallion

My recent read is a historical novel beautifully penned by Ram Sivasankaran; The Peshwa- The Lion and the Stallion. As the name suggests, the book is about the Peshwa or to be specific the legend of Bajirao Bhat or Bajirao as we remember him. This year, we already have witnessed the story of Bajirao and Mastani on the silver screen and naturally, when I started reading the book I somehow started comparing the storyline but ended on experiencing something more dramatic in the black and white form on what happened in Peshwas life before Mastani.

Ram Sivasankaran’s book crafted the historic period of Maratha dynasty with ease and poise and was not only restricted to the personal life of Peshwa but the dilemma of the ruler and the administrative scenario of that time.  For me, the book started where the movie ended and somehow I found several quotations of mine answered through the quotes and anecdotes.

The Rivalry between the Mughals and Maratha is the theme and the book was moving with the characters of  Balaji Vishwanath,Bajirao Bhat, Nizam Ul Mulk and Kashibai and am must mention is the portrayal of Holkar back in the 18th century. The battle between Balaji Vishwanath and Nizam followed by the rise of Peshwa upon his father’s death and then his approach towards the life ended on a mention of Mastani finally at the end which boosts the mind of readers to wait for the 2nd part! After all, we wanted to read what’s next in Peshwa’s life.

Historical novels are something I enjoy reading and moreover  Ram Sivasankaran’s The Peshwa- The Lion and the Stallion is full of the drama, proper editing and full of punches and naturally I didn’t found anything negative to comment about but to wait for the next part!

Disclaimer: I have received  The Peshwa – The Lion and the Stallion from Writersmelon.com and the review is unbiased based on my interest and reading experience.

New Menu Launch at Au Bon Pain and revisiting the memory of “No matter what they call us”!

« Chili’s Grill & Bar at Acropolis Mall and I am not Bumba-da; I am not Industry!
Jai Kali Kalkattewali; there is Paranthe Wali Galli! »

Maa asked "Why Saree today? Is there something spe

I prefer Maa to take the pain of making Pithe unle

Gurer Patishapta, a winter delicacy that I try to

Dudh Puli a delicacy cooked in the Bengali househo

And a perfect winter evening at a Bengali home is

-Why do you want to bake a cake? -Baking is baking

Homemade with love! The daughter says her mother m

How about some grilled lamb chops friends while w

In Kolkata, if I consider the cafes, there are ver

It's time to cut the cake! Merry Christmas friends

For the love of winter veggies! On the frame Beng

I reached home from the office and found them (@re