I was a bit skeptical before attending the Vegan food workshop organized by the Swissotel given I am not somebody who knows or cares about vegan food a much! I am a typical foodie in love with my portion of non-veg and selected lactose induced food and naturally attending the vegan workshop by the Swissotel along with celebrity Australian Vegan Chef Alejandro Cancino and Kolkata born Chef Nivi who is equally in love with the goodness of Vegan food and obviously Chef Pranay was quite an experience for me and the best part is was worth attending! 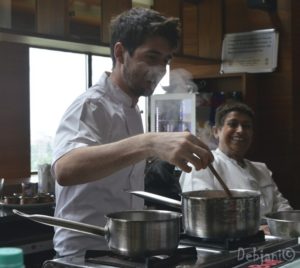 I have not given much thought over vegan food and in fact never thought that our own Bengali Food has several options which are truly Vegan! For me food has no barrier neither I have any problem with any typical type of cuisine so I attended the workshop with open heart and to learn about the specificities. It was good to interact with the chefs and to learn their point of view over the vegan food. It is not that they are typically strict over the Vegan thing and they do not even have any problem with the alternate options but yes they are well equipped with the vegan part. What made me more interested is the cooking for the Lactose intolerant; we sometimes totally forgot about this part however Vegan food is something actually synonymous to the offerings for Lactose intolerant people. 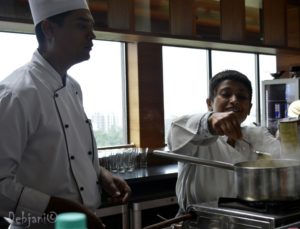 Coming to the workshop we attended at Swissotel , three dishes were prepared there:

The soup was really flavorful and more of a minestrone with the crunches of veggies and I found Chef Alenjandro’s process of cooking really hassle free. The cutlet was however best amongst the three offerings which was perfectly cooked from inside with proper use of spices and a coating of Poppy seed made it more Bong; after all Nivi is a Bong and quite determined with the cooking ingredients and the Bongness. . The Payesh was prepared with Soy Milk and Coconut milk along with the Sevian and nuts and for me it was actually the average one given the use of excess cardamom which I found not much necessary. 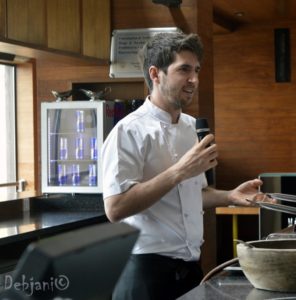 Chef Alenjandro has shared the global context with us about the vegan food and also about his journey including his stay in different part of the world starting Argentina, Japan, UK and presently Austrelia. Nivi who used to be an accountant but now a chef presently living in Brisbane is quite conscious about her Bengali origin has shared how she has experimented with the Bengali part of Vegan food. She shared and in fact made us conscious that how a Bengali Chorchori is actually a Vegan food!

It was really good to see three amazing Chefs working with the Vegan food and awesome to taste the end products along with a constructive discussion followed by a perfect lunch for which I don’t need to write much given when it comes food Swissotel is always lovely.

We were provided with several recipes  and I am delighted to share the recipe of Quinoa Soup shared by Chef Alenjandro.

Disclaimer: Debjani was invited by the management of Swissotel and the post is based on her experience and is unbiased.