The week 2-27 November 16 is being selected to promote the food culture of Italy and almost 130 countries around the globe are participating in the event “First week of Italian Cuisine”.  In Kolkata, along with Hyatt Regency The Park, The Oberoi Grand, and Taj Bengal, ITC Sonar also participating in the event and they have chosen the West View Bar and Grill for the event. Chef Vittorio Greco who is presently working with the Chennai property of ITC has taken charge to curate the menu at ITC Sonar. Originally from the Southern Italy Chef Vittorio Greco has many feathers in his cap when it comes to the Italian cuisine and it was a pleasure meeting him and to witness his passion for the Italian food. 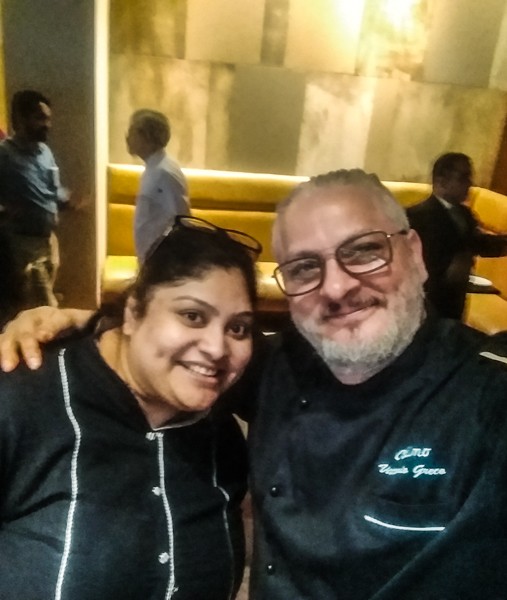 I already have attended the event organized by the Italian Consulate in Kolkata on 21st and 22nd November and hence was aware of the spread ITC Sonar has decided as part of the Event menu. A post will be coming soon furnished with my experience of attending the event. I was not able to visit other hotels thanks to my super busy work schedule but somehow managed to be there at ITC and found it amazing while interacting with the Chef there. Indeed a man with golden heart, I found Chef Vittorio Greco is really passionate about the food of his ancestral place. He has elaborated beautifully about each dish served to us and apart from the taste I found the way the food was conceptualized really well.

The Menu was divided into the typical structure of Antipasti (appetizers), Zappe (soups), Pasta and Risotti (pasta and Risotto), Secondi Piatti (main course) and Dolci (dessert). I found the Chicken Breast with Tuna Sauce, Sesame Seeds, and Crispy Bread one of the best items served there which were one of the appetizers as well. The Tuna sauce was creamy and rich and was working perfectly with the bite-sized chicken and sesame flavored bread. However, the 2nd appetizer was something that kind of kicked my taste bud with the flavors; which was a combination aubergine, tomato and Parmigiano mousse and a salad prepared with aubergine which was drizzled with charcoal oil to enhance the flavor and was served with crisp parmesan. The Chef told us the process of having it which is quite simple; just to mix the salad with the mouse and then to have that with the crisp parmesan. 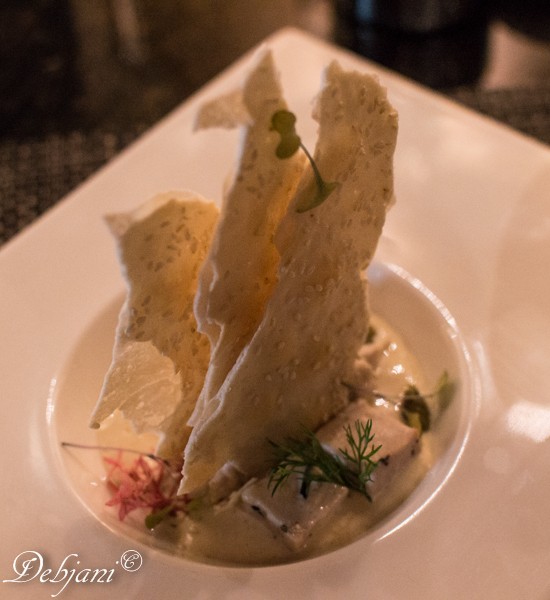 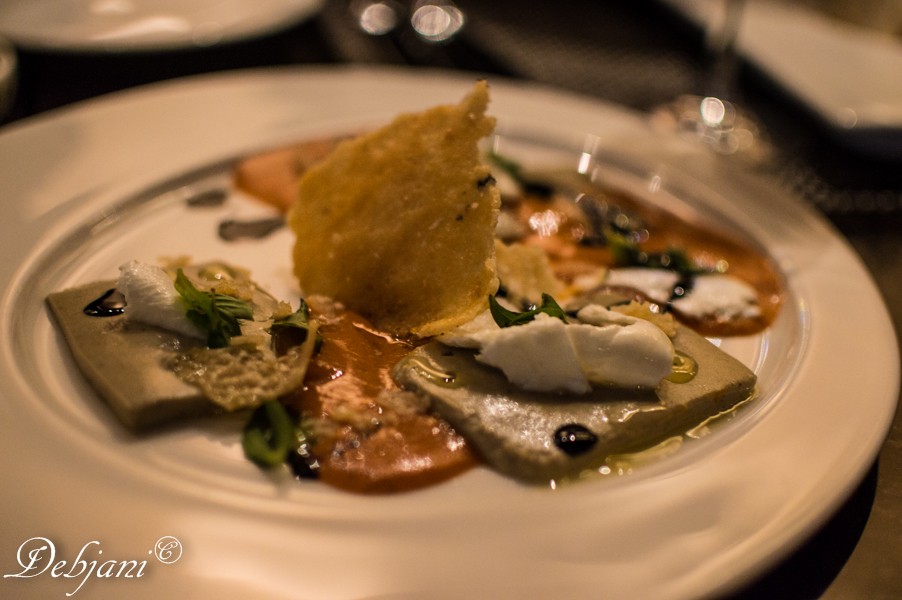 The next item served was Artichoke Soup with Gorgonzola and Dark Chocolate! Well yes, it has chocolate and the soup was loaded with cheese. The sweetness of Chocolate with the creamy savory flavor of artichoke and gorgonzola was indeed surprising however me being not a person fond of cheese, found the dish not typically my type. 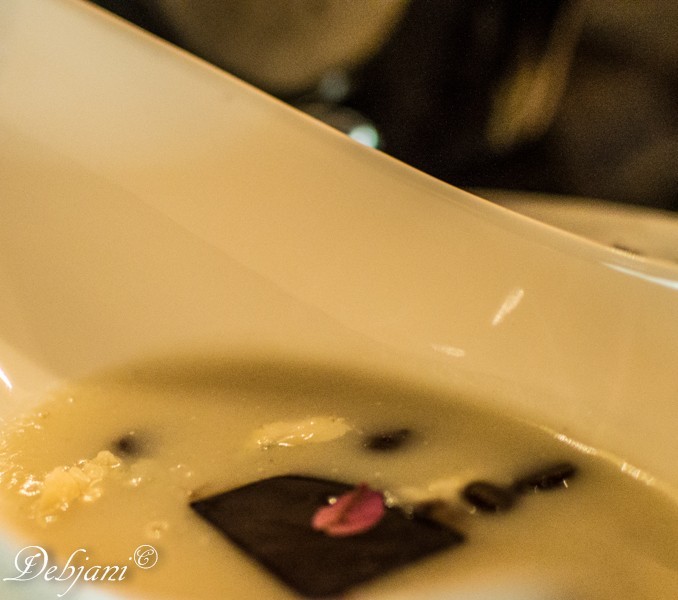 As the third course, a Lamb stuffed Ravioli was served which was served with an orange sauce. I found the combination of lamb and orange quite good and moving towards the main course I found the chef had planned to serve us poached fish! Well, I had the same already during the dinner I attended at the Italian consulate and found it one of the best items served in the consulate dinner. Naturally, I cherished my portion of fish poached with celery, capers in a wine broth again. 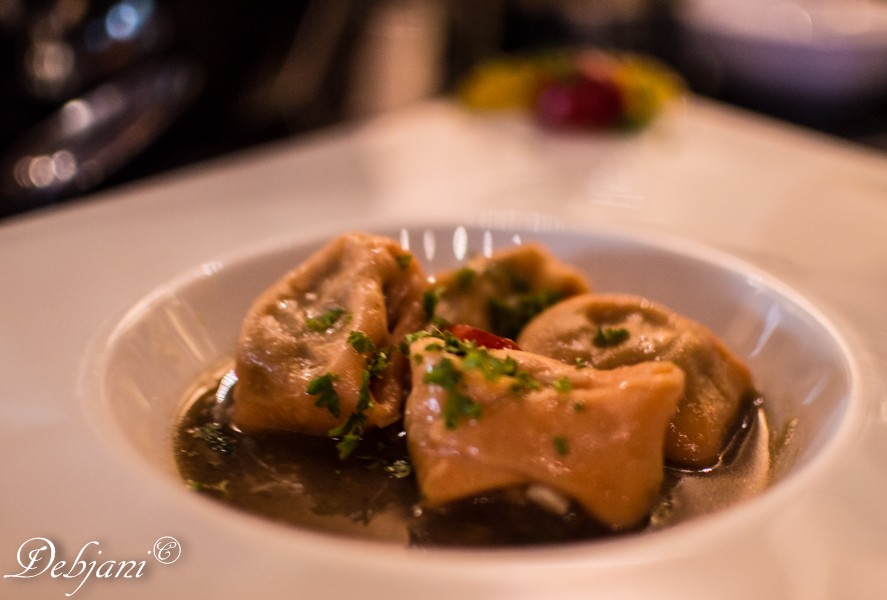 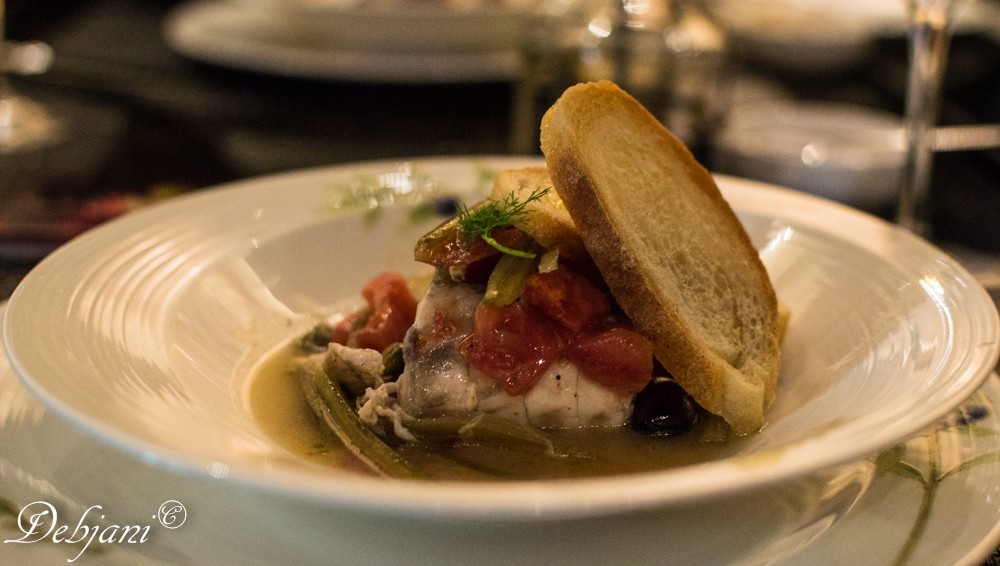 Now all need to be well with a perfect end and hence the Chef served us a perfect portion of Tiramisu to finish the meal! 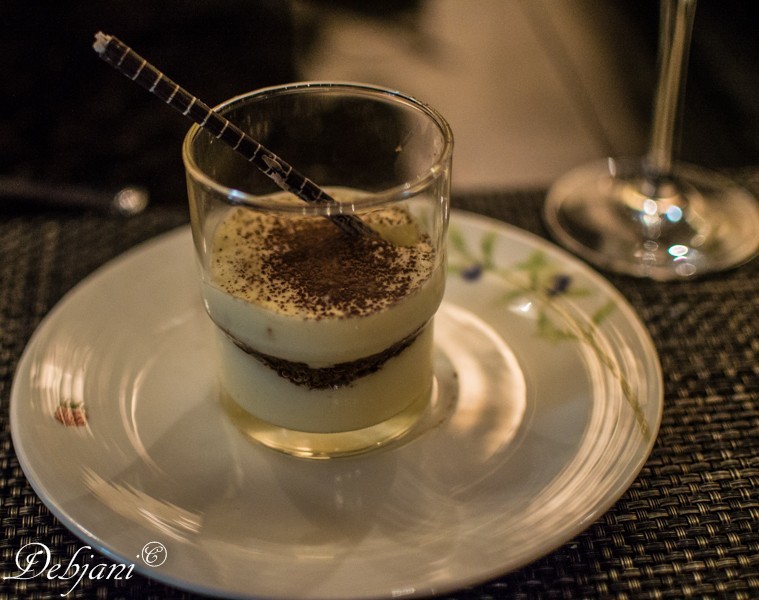 Disclaimer: Debjani was invited by the management of ITC Sonar at the West View Bar and Grill to sample the Italian spread.