A café that pinch me with the nostalgia  of listening to “No matter what they tell us; No matter what they do; No matter what they teach us; what we believe is true” using that gigantic headphone! Wondering why?  It was something else before the Cafe opened few years ago; a place that  was close to the heart of many Kolkatan alike me; Music World it was.  When I first visited Au bon Pain sometimes last year I was not typically happy while entering the place or it is better to say I started judging even before trying anything there and the fact is I was biased and I could not help it to not to do so and that has practically no relation with food but something else! A place much close to my heart, a place where I used to visit with my father during my precious childhood in late 90s and my years of adolescence in  2k; a place which was synonymous to my love for music during my adolescent turned into something different! Yes it was Music World; the famous one stop music place of Kolkata which was closed and then the place was taken over by Au Bon Pain. We the Kolkatan Kids of 80s and 90s had a special relation with Music World and it will remain same and seeing that place turned into a baking joint is however a bit weird even for a food maniac like me but as they say with good food you can win any battle and that is what happened with Au Bon Pain. One of the best places in Kolkata that make perfect Mac and Cheese and is strong enough to play with our emotional bonding with Music World. With the sweet French name Au Bon Pain that means “the good bread” is actually a prime when it comes to their baked goodies. 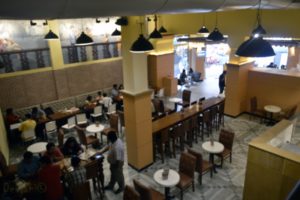 When I got the invitation more than a week back to represent Kolkata Food Bloggers and to  try out their new menu I was quite exited given I already have tried their previous menu so was hopeful with the new launch. They have arranged a blogger’s table there and I found many acquaintances from Blogging fraternity of Kolkata there who were as excited as me to try out the new menu. What I found along with the change in the menu is Au Bon Pain has worked on the interior and with the new shades of pastel and wall décor the place is looking classier. They are now in with an open kitchen setting which I found clean a yet modern. 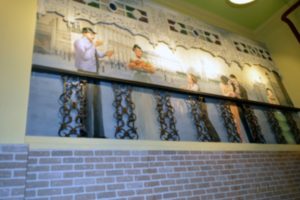 Coming to the food that we have tried there, though the new menu was in our priority list but I had a plan to try out my old favorites as well. The spread was basically divided into three parts drinks, Savory goodies and choice of sweet dishes.

We have started with the tried and tasted Cold coffee and as always it was decent followed by a Banana Yogurt Cooler! Now I am not a person who likes Banana Yogurt Cooler and obviously I am not going to share how I found that given that will tends to nothing but bias-ness. We have tried around 4-5 types of coolers that includes classic Mojito, a mint iced tea and Frozen Mint lemonade. I found the frozen lemonade best of the lot and obviously worth trying. It is worth mention that Au Bon Pain is offering unlimited tea for Rs 50 and same of Cold Drink in a particular day for just 60 bucks. 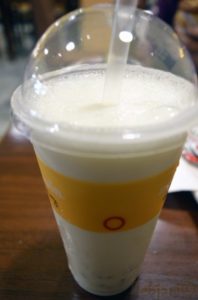 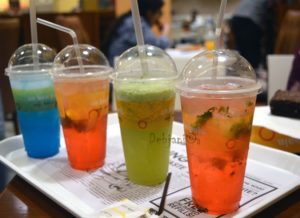 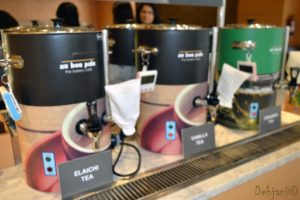 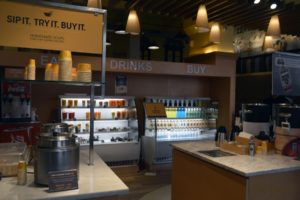 Coming to the savories, we have tried several items from their new menu and I found Con-witch or the cone shaped sandwiches worth trying for. I have tried one with Chicken filling and from the veg section it was a cone-witch filled with Mushroom and Eggplant. As always, Bread is their strong point and hence no negative point for the cone-witches. The next item we tried was the Keema queen-a mon; with the crunchy outer crust filled with Keema stuffing. One of my blogger friend opted for the Noodle Salad which I tried a spoonful and found decent. The item that we opted next was the Peri Peri chicken wings which I found just average.  Our savory tasting ended with a decent pasta serving and Tofu Thai Curry which was again an average dish. 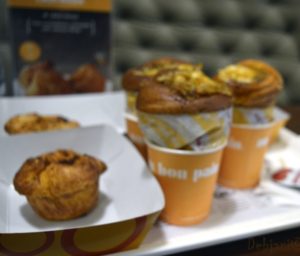 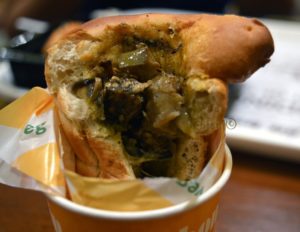 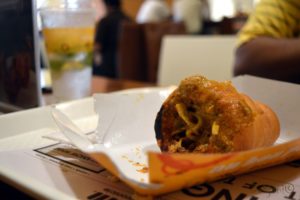 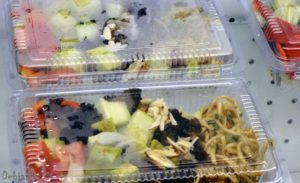 I was not much interested in the dessert serving and had their Red Velvet cupcakes with cream cheese frosting and a serving of brownie. The former one was beyond average with higher sugar content while the later one was quite gooey to try for. 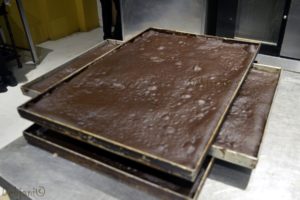 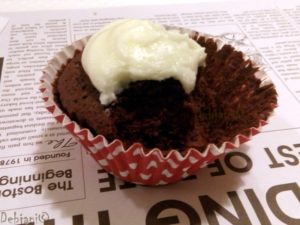 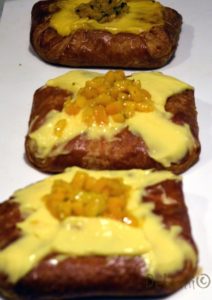 So my dear reader if you wanted to have some perfectly baked goodies and wanted to feel that typical park street’s charm (and may be the memoir of Music World) then Au Bon Pain is worth visiting for sure and after all they are offering  unlimited tea and cold drinks just for half of hundred! Then why not!!

Disclaimer: Debjani was invited by the management of Au Bon Pain to represent Kolkata Food Bloggers and to taste their new Menu. The post is based on her experience and is unbiased.

Enjoy the festive season with fresh blueberry in different desserts

Maa asked "Why Saree today? Is there something spe

I prefer Maa to take the pain of making Pithe unle

Gurer Patishapta, a winter delicacy that I try to

Dudh Puli a delicacy cooked in the Bengali househo

And a perfect winter evening at a Bengali home is

-Why do you want to bake a cake? -Baking is baking

Homemade with love! The daughter says her mother m

How about some grilled lamb chops friends while w

In Kolkata, if I consider the cafes, there are ver

It's time to cut the cake! Merry Christmas friends

For the love of winter veggies! On the frame Beng

I reached home from the office and found them (@re